His Eminence Antony's Visit at the Pokrova Celebration 10/17/2021 The 71st celebration of the Ukrainian Orthodox parish of St. Mary the Protectress in Rochester, NY, began with the arrival of His Eminence Metropolitan Antony Saturday evening, October 16, to attend the Moleben, the Supplication prayer to the Virgin Mary on the occasion of the visit of the miraculous Myrrh-streaming Kardiotissa (Tender Heart) icon of Mother Mary with the Baby Jesus in arms. The icon was brought to Rochester from St. George’s Carpatho-Russian Orthodox Church of Taylor, Pennsylvania, by subdeacon Theodore Worobey, Jr.  A second, similar icon of Mother and Child from Hawaii, also with similar qualities and miraculous history, accompanied the larger Kardiotissa icon.

Subdeacon Theodore Worobey elaborated about the 10-year history of the icon, the hundreds of miraculous cures for which the myrrh-streaming Kardiotissa icon became famous. Lydia Dzus translated the monologue into Ukrainian as Subdeacon spoke in English.

At the conclusion of the Moleben Saturday evening, His Eminence Metropolitan Antony, seated at the left side of the tetrapod (the sub-altar on which the icons were placed), anointed the worshippers as they lined up to offer reverence to the Kardiotissa icon. After the evening service, the traveling clergy and members of St. Mary’s community gathered for an evening meal, prepared by Angela Tebyrtse, Halya Divonka, & Maria Melnyk, in the parish hall set behind the church.

On Sunday, the sun broke through a cloudy sky and cast its light upon the church after a rainy night and shone on the faithful gathered at the front of the church for its Sunday prayer worship honoring the feast of Pokrova and the 71st anniversary of the church’s founding. Two young girls were scattering rose petals before the cortege consisting of His Eminence Metropolitan Antony and three seminarians as they were leaving the rectory and approaching the church steps.

Ascending the church steps, His Eminence was greeted by Parish Board President, Mykola Sztanko and Sisterhood member Zunia Palij, both wearing Ukrainian traditional embroidery, with the traditional Bread (Kolach) and Salt, wishing him good health and prosperity on the joyous occasion of the 71st Parish Jubilee.  Graciously accepting the greeting, and thanking for the beautiful kolach, made by Nataliya Stefankiv, Metropolitan Antony stepped forward into the church to the awaiting clergy: parish rector, V. Rev. Ihor Krekhovetsky, along with visiting clergy from the Northern New York Deanery, V. Rev. Yuri Kasyanov of Holy Trinity, Cheektowaga; V. Rev. Mykola Andrushkiv of St. Luke’s, Warners; Rev. Vasyl Dovgan of St. Nicholas, Troy; & V. Rev. Ivan Semko of St. Mary the Protectress, Herkimer. His Eminence was accompanied to the parish with St. Sophia Seminary Students:  Deacon Serhiy Khomytskyj, Subdeacon Jaroslav Bilohan and seminarian Mykola Stefanyk.  Having been greeted by the parish rector with a cross and holy water, His Eminence venerated the offered cross, then with a smile, turned and blessed everyone with holy water, before proceeding into the Nave.

During his sermon, Metropolitan spoke of the unquestioning faith of the Virgin Mary – the Mother of God – to her Beloved Son and our God, Jesus Christ.  The Feast of the Protection of the Mother of God – POKROVA – has been a very important on throughout Ukraine since the sixth century.  The Mother of God understands us as human beings in relationship with Christ the Son of God because she is one of us.  She comprehends our faults and weaknesses, our fears and our strengths, our talents and our ability.  She knows that we can gain control of our lives and devote them to God in the Holy Trinity and has assisted in that life-long effort by carrying our prayers to our Lord, beseeching forgiveness and remission of our sins and the salvation of our souls.

His Eminence spoke of the extremely important role the Mother of God played in the establishment of the Body of Christ – His Holy Church, especially during the first ten years after the Ascension of our Lord and the Descent of the Holy Spirit.  She was with the Apostles at that Descent and received the Holy Spirit with them and was able to share the details of all she “held in her heart” about the entire life of her Beloved Son and our God.  She witnessed all of the three-year ministry of our Lord before His Crucifixion and Resurrection, understanding that her witness would benefit all mankind.  People traveled from all over the then known world to Jerusalem to be near her and to listen to her speak – even though infrequently, but just to be in the Holy City was to be in her presence and to feel her love.  Ours, as faithful Orthodox Christ is to emulate the faith of the Mother of God with a certainty in our hearts about what our ultimate destiny is to dwell with Him and be one with Him for all eternity.

The Metropolitan called the faithful to come forth to the Myrrh-bearing Icon of the Mother of God of Tender Heart, which has been producing Myrrh for over ten years, providing hope and strength to thousands.  Hundreds of miracles have been confirmed through anointing with the holy Myrrh and the next one may be in our own lives if we receive it in faith.

The Church Choir, under the direction of Zina Dzus-DeBole, joyously resounded “Ton Despotin” & “You Clothed Me in Vestments” as the Hierarchical Liturgy commenced. Throughout the balance of the liturgy, the choir sang gloriously.

As in the prior evening’s service, His Eminence then sat by the tetrapod and anointed the faithful who were each gifted with a lovely Kardiotissa icon prayer card as they lined up to honor the visiting icons.

The celebration continued with a banquet at the parish hall. As people awaited the clergy’s arrival, they were treated to on-screen slide show of images portraying the 71-year history of the life of this parish, compiled by Wil Ost & Mykola Sztanko, from the photo libraries of Natalka Pasicznyk & Barbara Dyga.

Parish Council President Mykola Sztanko enthusiastically welcomed all to the 71st Jubilee, one year later than the planned 70th, postponed due to the Coronavirus shutdowns. The choir greeted Metropolitan Antony with “Ton Despotin” as he entered with clergy & Dobrodiyky following. The choir then sang ‘Our Father” after which Metropolitan blessed all with the invocation, followed by a moment of silence & “Vichnaya Pamyat” in remembrance of the founders, benefactors, & past parish members.  President Sztanko then handed over the rest of the program to emcee Parish Council Vice President Lydia Dzus, who introduced the head table. Then the festive banquet began with borscht, courtesy of Nadia Sukhenko, & a delicious buffet, prepared by Waldemar Sukhenko, Anatole Prokopenko, Walter Kompanijec, Suzanna & Wil Ost, Natasha Nechipurenko-Masny & daughter, Alexandra, followed by a self-serve dessert table donned with tortes, cakes, cookies, breads donated by numerous parishioners.

During the banquet, delegates, donors, & sponsors were recognized. President Sztanko surprised His Eminence with a special presentation of the parish & members’ donations in response to the recent flood relief appeal.

The banquet culminated with a concert, beginning with the children from the parish, reciting a poem related to the significance of the Pokrova, directed by Angela Tebyrtse & Ivanka Lyubezna. One of our youngest parishioners, Hanusia Kulya sang a solo a cappella, “Pleni Sunt Caeli Et Terra Gloria Tua”, a Latin prayer, which translates to ‘Heaven & Earth Glorify You, O Lord’. Then the Dzus Twins, Zina & Lydia, accompanying themselves with guitar and mandolin, beautifully sang & played four songs, dedicating their last song “Play, Bandura, Play” with its words of many, many years of “happiness, good health, & good will, as deep & as wide as the Dnipro River” to His Eminence Metropolitan Antony as he embarks on his 50thanniversary of entering priesthood & service to God. Malvy, a local women’s group led by Zhanna Wirlo, sang a few songs including a kolomeyka medley, accompanied by Kostya Lukyniuk, violin virtuoso, who then proceeded to close out the concert with His Eminence’s favorite, “Kardash”. In closing, V. Rev. Ihor Krekhovetsky thanked everyone for their attendance & for all the work dedicated in making this jubilee a success. His Eminence closed the celebration with the benediction.

Text by Mykola Sztanko, President of the Parish Board 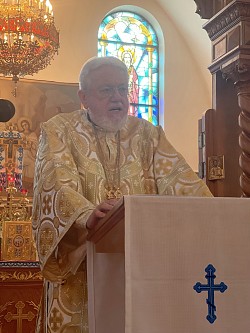 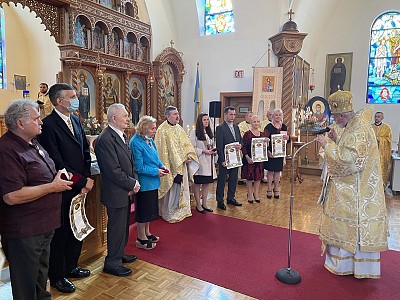 A prayer service for our 2020 high school graduates who are moving on to their next step of their life. This section will be used to highlight memorable events in our parishioner's lives.  Their achievements, accomplishments, successes, special events, memorials, etc. will be posted.  Please advise Father Ihor or any Council Member (listed in our Administration section) of these events.   It would be great if you could provide pictures whenever possible.